Do you have a pop up camper with a water damaged roof? Unfortunately, the roof of the camper we bought was beyond repair and rotting away.  We figured out how to fix it by removing all of the water damaged wood, and then rebuilding the roof structure and reattaching the aluminum skin.

When we purchased our 1993 pop-up camper, I knew there was water damage to the roof. What I didn’t know, however, was how extensive the damage actually was. We were able to rebuild the roof and now have a like-new camper, but the amount of time it took to complete made it quite the project.

After figuring out how bad the damage was on our camper, I searched the internet for videos and posts on how to fix water damaged roofs, and although I found some helpful videos, I struggled finding detailed posts that walked through the process on how to completely rebuild parts of the roof. Hopefully this post will be helpful for others that find themselves overwhelmed by the process of fixing a rotting roof on a camper like I did!

Part 1: Removing the Pop Up Camper Roof and Assessing the Water Damage (you are here)

Part 2: Rebuilding/Repairing the Roof and Making it Water Tight 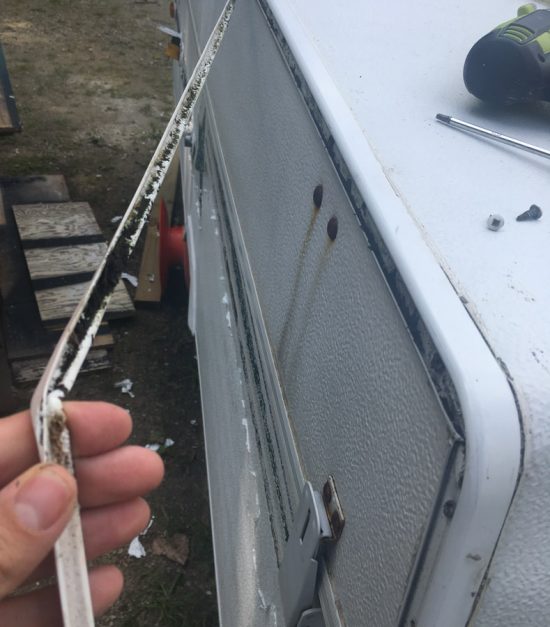 In order to unscrew the trim, the first step is to take out the vinyl trim insert that covers the screws. If your camper looks anything like mine, the vinyl trim is probably cracked, broken, moldy, or all of the above. This trim should just pop out as you pull on it. 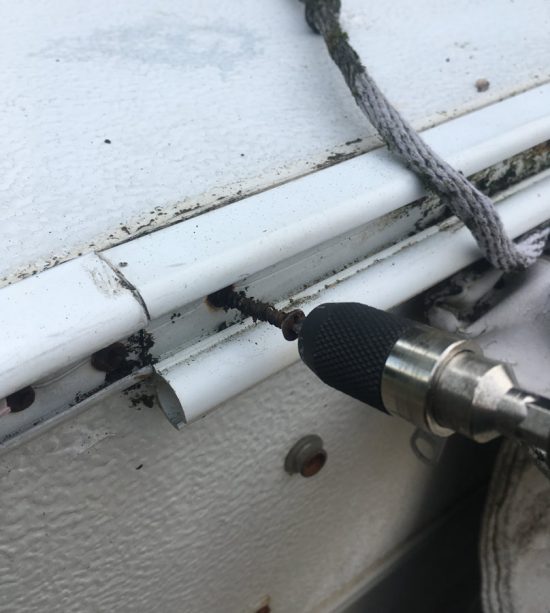 Then, it’s time to remove the screws. As I was taking out the screws, this gave me a good idea of where the water damage was on the camper. Some of the screws came out rusted, and in some cases, completely rotted away, which signaled that area of wood was probably rotting away as well.

For the screws that were completed rotted, the screwdriver obviously didn’t have anything to grab on to, so I ended up using a combination of a pry bar, pliers, and some swearing to get the screw pieces out. 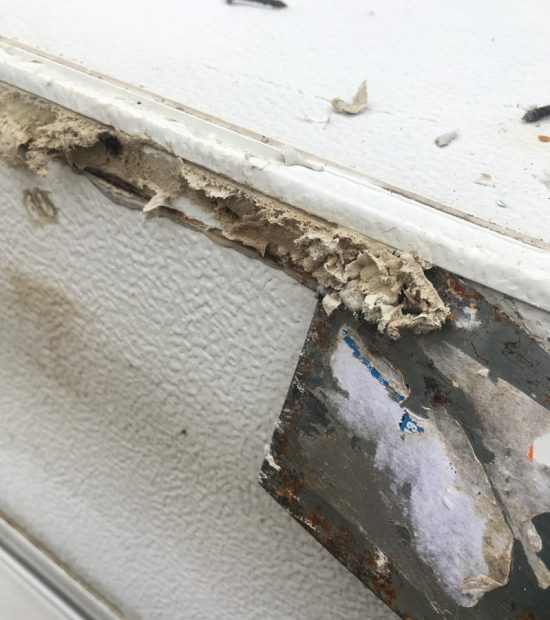 After all of the screws were removed, I used a metal putty knife/scraper to remove all the old, gunky, sticky butyl tape.  This process was tedious, to say the least. After most of the putty tape was removed, I used mineral spirits and a fine mesh steel wool to remove the excess gunk. 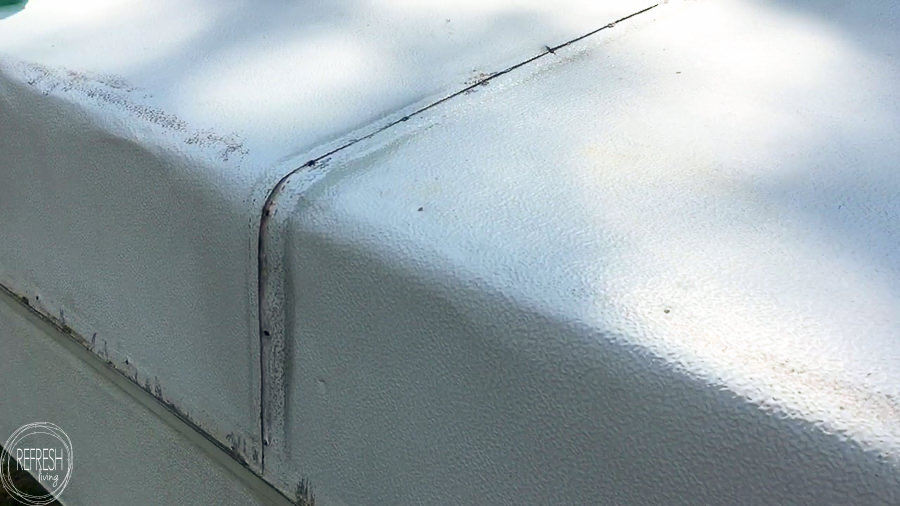 At this point, you can easily lift up the skin to see the condition of the wood of the roof.  As I unscrewed the trim screws, some of our camper roof just started falling apart because the whole perimeter, and most of the top frame, was rotting away.

You can get a better view of the amount of water damage in this video. I have the finished camper reveal, as well as the other steps in my roof rebuild process, over on my You Tube channel. I’d love for you to head on over, check them out, and even subscribe if you’d like to see other pop-up camper projects in the future!

Detach the Canvas and Remove the Roof

If you find, like we did, that you’ll need to replace a good amount of the wood on your pop up roof, it’s time to detach the canvas and then remove the roof in order to rebuild it. If your water damage is minimal and the wood is still structurally sound, you might be able to skip ahead to Part 2 – Seal Up the Roof to Prevent Future Water Damage.

Obviously, there was not a chance we could salvage some of the wood on our roof, so we set up our plan to rebuild it, which required us to remove the roof.

First, we unscrewed the canvas from the inside of the camper. Basically, the canvas is attached to metal strips that are then screwed into the sides of the roof.  I made sure to take pictures of the brackets around the entire inside perimeter of the roof so when it was time to put everything back together, I had a visual model to help me. 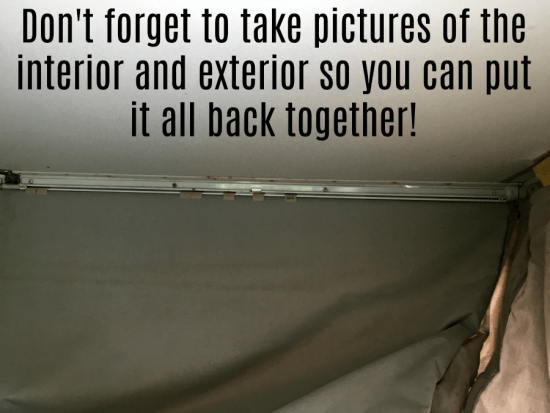 After the canvas was detached, I unscrewed the four lifting brackets from the sides of the roof frame. Ours were attached with bolts and nuts on the inside of the camper, so they were easy to remove. We used 2 x 4s to hold the roof in place while we detached the other lifting brackets. 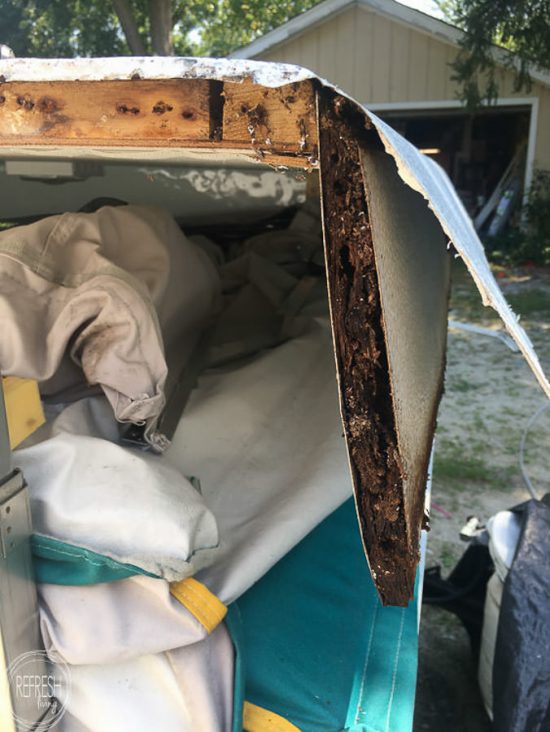 After everything was disconnected from the main body of the camper, we took off the roof and put it on top of two sawhorses right next to the camper. 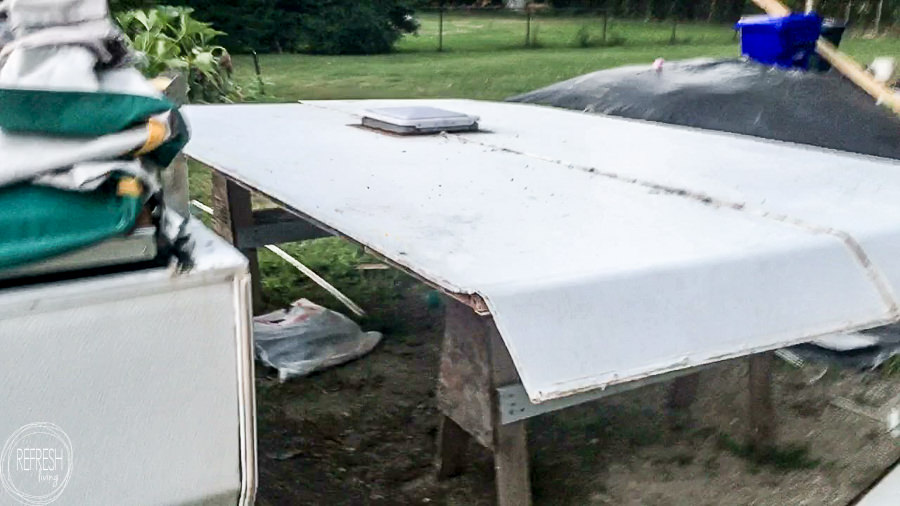 For a better look at our deconstructed roof, watch the video below.

In the video above, you probably saw just how rotted away some of the wood on our camper was.  This thing had clearly been taking a lot of water for a long time.  We opted to completely remove all four sides of our roof, as well as replace the outside edge of 1 x 2″ framing.

At this point, if the water damage is extensive enough, you have the option of completely removing the skin, the foam, and all of the framing lumber and rebuilding it from scratch. (If you need to go this route to rebuild your roof, I’d recommend checking out The Pop Up Princess, and they just rebuilt a pop up camper roof and decided to replace everything.)

If I had remembered to take a picture of the roof turned upside down before we started to repair it, here’s what it would have looked like. 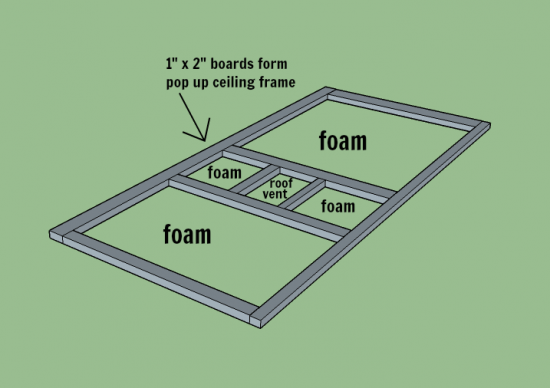 We decided that instead of completely taking apart the entire roof and replacing all the foam and framing, we would just replace the pieces of wood that had taken water and were no longer structurally sound.  In the video, I mentioned that we thought we were going to keep some of the 1 x 2″ frame, but instead we decided to just replace all the 1 x 2s along the edge. Thankfully, we didn’t need to replace the interior 1 x 2″ frame, and therefore we could keep the skin and foam attached. 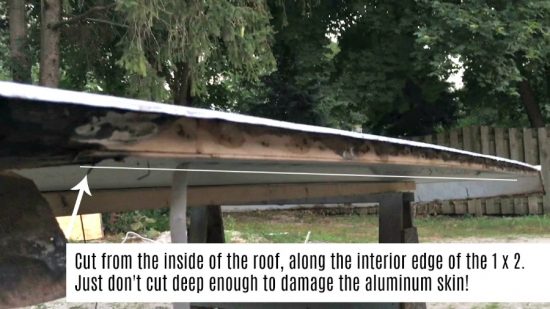 To remove the 1 x 2 pieces that were still attached, I used a small, 4-1/2″ compact circular saw to cut from the bottom right along the edge of the 1 x 2. The only thing that was holding those pieces in place was that the interior ceiling was still attached to them.  It’s important to make sure you don’t saw deep enough to go right through the aluminum skin!  This will add a lot more work to repair the skin in order to keep out those water leaks.

More on how we rebuilt the roof frame and sides in the next step, which you’ll find in the second post in this series.

Part 2: Steps to Repair and Rebuild a Water Damaged Pop Up Camper Roof and Make it Water Tight 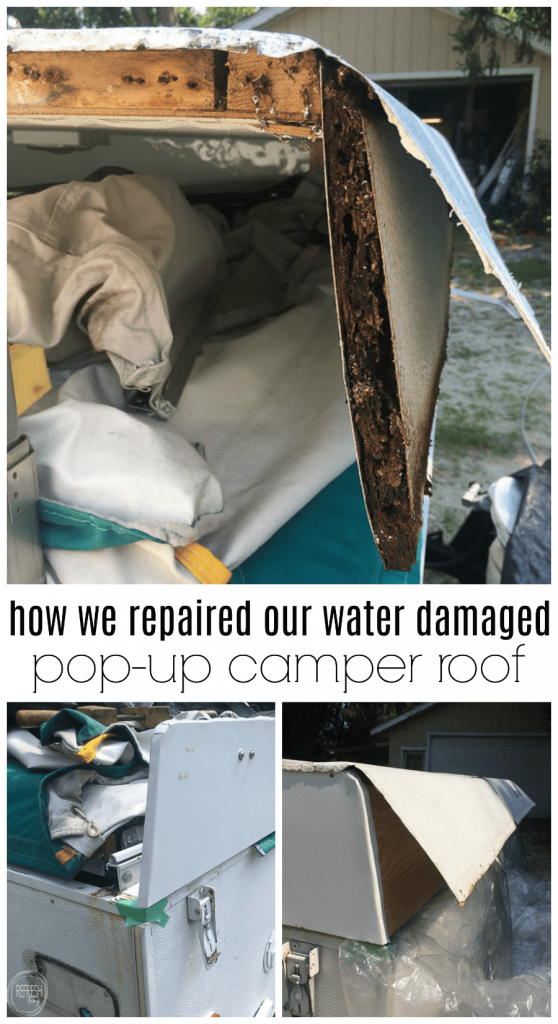 You can find all of my other pop up camper remodel projects here. 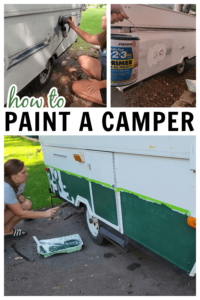 How to Paint a Camper Exterior 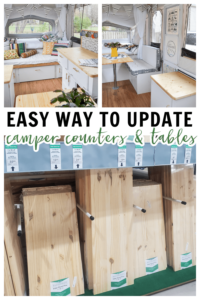 How to Add Wood Countertops to RV Camper 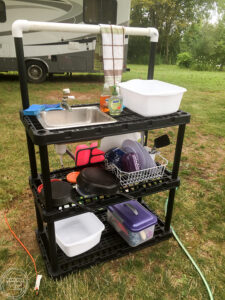 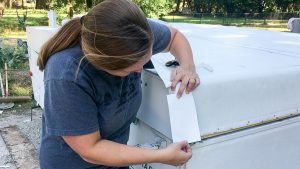 How to Rebuild and Repair a Water Damaged Pop-Up Camper Roof: Part 2 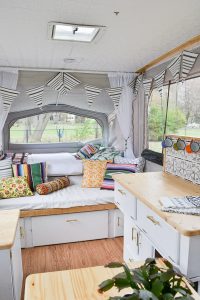 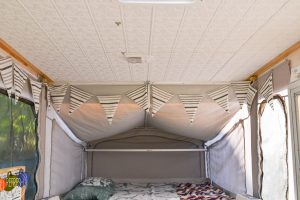